It’s a bad game that only Berserk fans will really enjoy, but they’ll really, really enjoy it. Let me put it into perspective for you: I’m not even a real Berserk fan. I haven’t read the manga, and I’ve only seen clips from the anime. I only know about the series through memes, binge-reading its wiki, and that one episode of Death Battle. And I still logged almost 100 hours into this game, loving almost every minute of it. Even though it sucks.

It’s not EVEN a good Warriors game, because there’s almost zero attack/defend strategy. I’m not going to pretend to be a Dynasty Warriors expert, specifically because I’ve literally never played any of the Dynasty Warriors games. But I did play Hyrule Warriors, and something I enjoyed about it was that the battles were actual *battles*. You had to defend and take points/bases. In Berserk, almost every mission is just you pushing straight forward, without having to worry whatsoever about losing bases/points.

Remember when he killed 100 men in one night, and it was a huge deal? Now you rack up those numbers in about 5 minutes, over and over and over again. Every few swings of your sword will meme a dozen men. And that’s awesome, but it’s too awesome. There’s way too much trash-clearing.

There’s the typical slightly-less-weak enemies that you can lock on to and have to use some very light brainpower to defeat, and then there’s some god-awful bosses that will tear your asshole asunder unless you basically cheese them.

None of it’s very hard. That’s not necessarily bad, but it’s just brainless. That’s really all the game has going for it. Mowing down waves of enemies effortlessly. But you can do that in any Dynasty Warriors game. There’s some items to use like your crossbow and arm-canon, but usually none of them are necessary. I take that back actually, I think I remember the arm-canon being pretty useful. I don’t remember, I haven’t played the game in like a year and I’m only writing this because I just took adderall and randomly became upset that THE GAME DOES NOT INCLUDE SKULL KNIGHT ON THE ROSTER.

Skull Knight is the Gandalf of Berserk. He’s this enigmatic, heroic badass who literally fights against fate itself. He can fight gods and demons while riding a horse up a 90-degree wall. I won’t spoil anything, especially since, again I’m not a true fan yet and there’s a lot I don’t know myself, but HE’S VERY IMPORTANT. It’d make sense to play as him alongside the other characters you can play as. Besides Guts and Griffith, he would probably be the #1 best character to be able to play as. 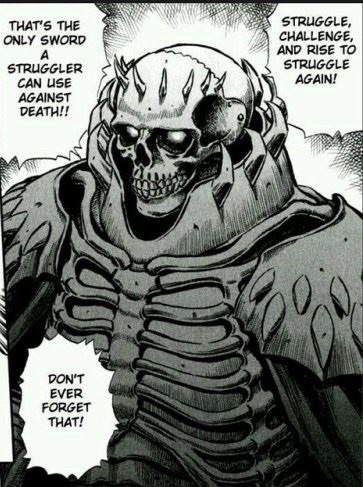 So do you get to play as him? No, of course not.

Who do you get to play as instead? How about some stupid, gross, ugly minor character who is unappealing in absolutely every way and who you wouldn’t have even guessed to be a playable character? How about Wyald?

at least you can get Skull Knight’s horse. And crafting items to strengthen your character was preddy fun and not unbearably convoluted.

Playing as Zodd was really good, too. Zodd’s transformation was like what the Balrog should have felt like in LOTR Conquest. See? Zodd was a good pick.

But what’s with the name? “AND the Band of the Hawk”? Why is there an “and”? Berserk isn’t a– nevermind, I hate this game.

6/10, preddy good, I liek it. i hate it. it’s ok. Hyrule Warriors was better in absolutely every way. Why didn’t I play it as much then? Oh, I sold my Wii-U. What a mistake of a console. Should I get a Switch? No, I should grow up and stop playing video games. 6/10.